UPDATE 09/11/2018
This is story of how my bamboo bike got stolen and the roller coaster ride I went on to try to get it back. Many of you saw the adventure as it unfolded, but you only saw a fraction of the story. After a year in the making, I’m so excited to finally bring you the full story.
When I decided to search for the bike I had a feeling it was going to be quite the adventure, so I decided to film it, but I never, ever expected it to turn out like this. I truly hope that you’ll take the time to watch this short film. I believe you’ll be very glad you did.
The theft of my bike resulted in me giving bikes to 55 people.

My bamboo bike was stolen last night!
(UPDATE: BIKE FOUND AND GOOD DEEDS DONE. SEE ABOVE.)
Those of you who know me probably know I have just around 100 possessions to my name and this is one of the most important, if not the most important. I don’t have a car and it’s my transportation. I’ve ridden across the United States doing good deeds on this bicycle. Thousands of miles of doing good deeds for others have been done on this bike! And now it’s been stolen in a single bad deed. It’s a little bit soul crushing.


I want to get this bike back and I’d like your help by sharing this story.
However, that is less important to me. As soon as the bike was stolen I asked myself, “How can I turn this into something good?” How can I turn my misfortune into someone else’s fortune? How can I turn a bad deed into good deeds.”
I quickly came up with an idea. I know how the horrible feeling of having a bike stolen. And I know it’s happened to a lot of other people. It really does suck and can ruin someone’s day and many days to come. Especially when it’s they depend on it to get to work or school. So, I want to turn my stolen bike into help for others who’ve had their bike stolen before.  I’m in a fortunate enough scenario where I can figure out something for myself. But there are a lot of kids out there who have had their bikes stolen and live in low-income scenarios where they can’t get another one. I want this stroke of bad luck for me to be good luck for 10 children who had a soul-crushing day when their bike was stolen. So, I have started a gofundme to raise funds to purchase 10 bikes for kids that don’t have a bike because it was stolen.
I also am a strong believer in the idea that hate cannot drive out hate and darkness cannot drive out darkness. In that way, I will apply that to this scenario. Bad deeds cannot drive out bad deeds. Only good deeds can do that. To combat this bad deed that has been done to me I will be doing good deeds for the rest of 2017. I want a world with more good in it and so this bad deed that has been done to me has enforced that I must do more good.
I am going to search for my bike today and if I find the thief I am not going straight to the police. Instead I am going to talk to him and ask him why and hear him out. I am going to ask him to commit to take a bike repair and maintenance class and then commit to volunteering to help people to fix their own bikes. This is the option that I will give rather than going to jail, and spending tax payer dollars on a system that likely won’t create the results that are needed for a more just society to be created.
–
Details about the theft:
Stolen at 9:00 PM in front of Catamaran hotel on Mission Bay. It was on the bike path on the bay. I was just 20 feet away, looking at the moon, and saw it happen. The thief sped off going north on the path and probably headed off at Fanuel and went North into Pacific beach. It looked like a young male (maybe 20’s or 30′) but it was dark so hard to tell. He was capable of riding the bike very fast so he definitely was not an old man. He looked fairly fit / skinny.
Details about the bike:
See photos for details. It’s a one of a kind bamboo bike. If you are in San Diego and you see a bamboo bike, it’s probably it. It says Goodfluence on the top tube and Calfee DIY on the bottom tube. The joints of the bike are black and look like carbon fiber but it’s actually casting tape. The good news is that you’ll know this bike if you see it.
The bike had a red pannier on the rear bike rack. That could easily be removed so I wouldn’t be looking for that in particular. My bike tools, my girlfriends jacket (which I was bringing to her to ride home together) and about $80 cash were in the bag. 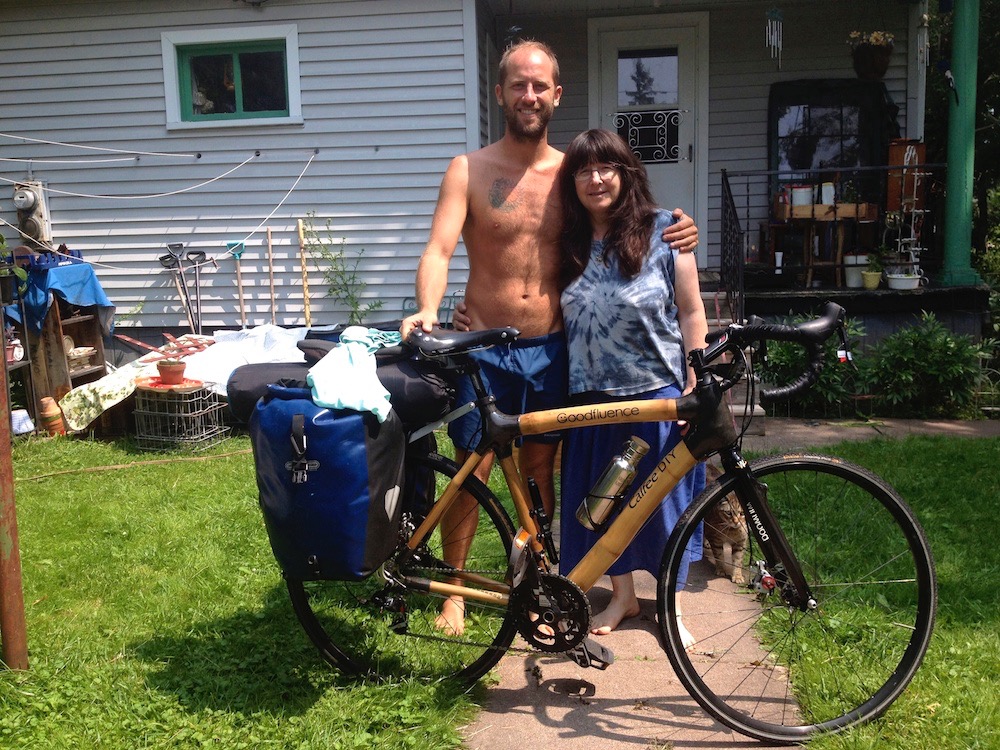 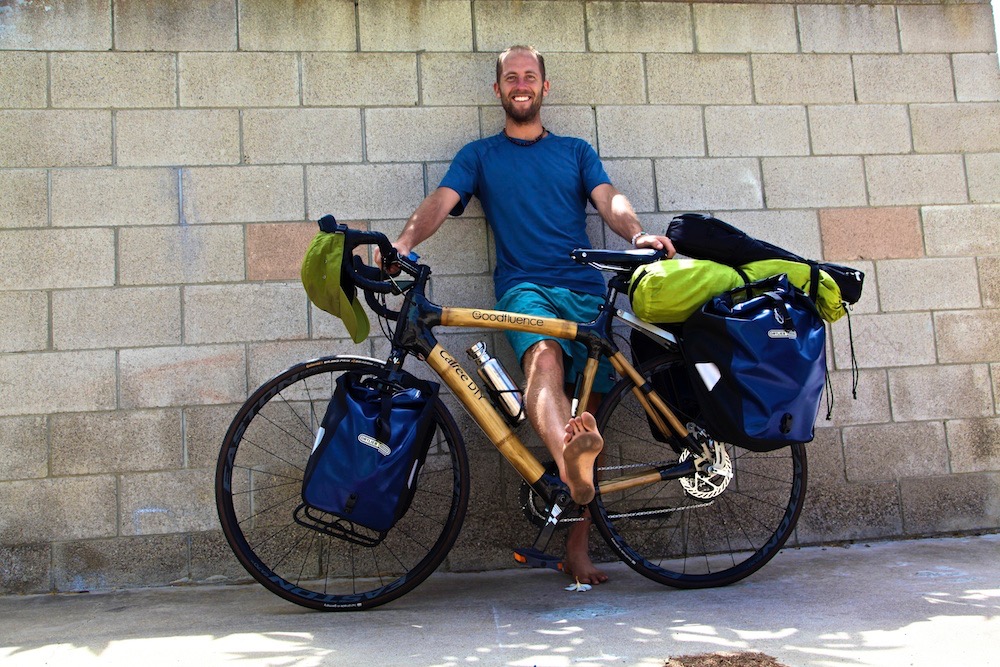 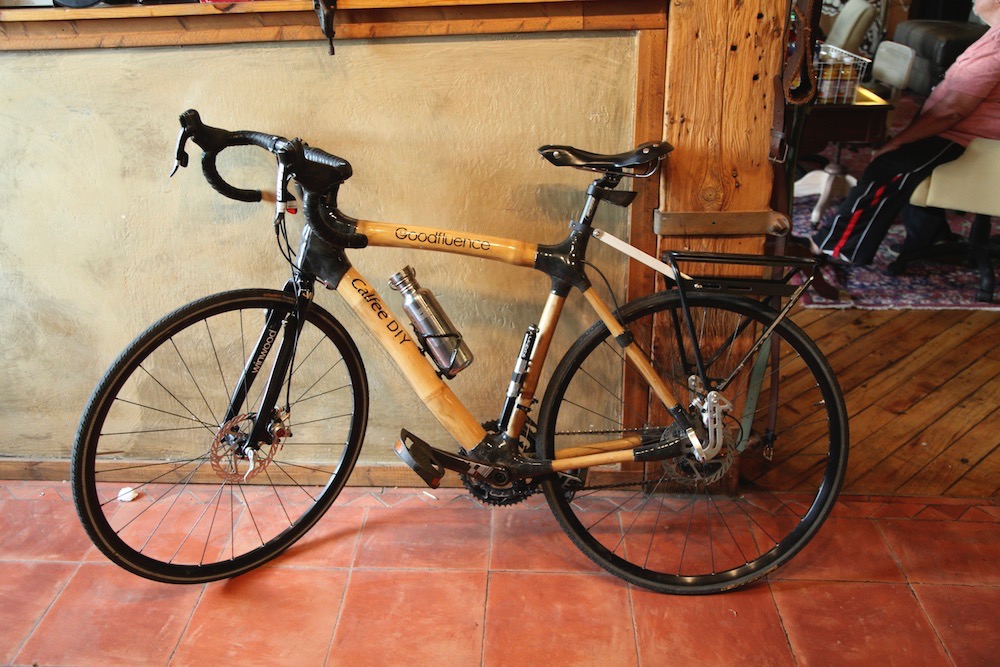 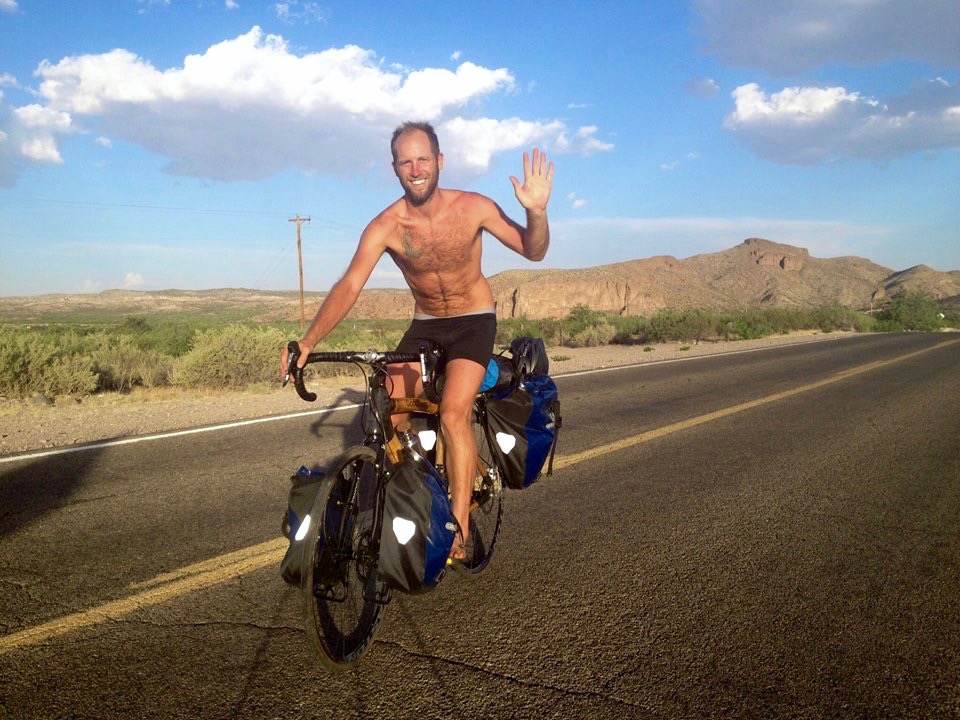 My 44 Possessions: Everything I Own Fits in My Backpack

My Thoughts on Veganism… and Why I’m Not Vegan

I’m not running for office. But I am your public servant.

I Promise Never to Be a Millionaire

On Health Insurance, Age and Death

23 Films That Changed My Life

From Drunk Dude to Dude Making a Difference

The Food Waste Fiasco: You Have to See it to Believe it

How to Travel the USA For Free (without mooching)

Lessons Learned from a Year without Showering

Receive inspiration in your inbox